Mothers Get Social on Smartphones 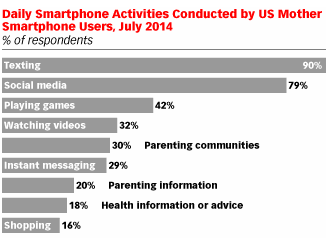 What are today’s mobile mothers doing when they’re tapping and scrolling on their smartphones? According to July 2014 polling by BabyCenter, they’re likely texting or logging on to social media.

BabyCenter noted that smartphones were a key way mothers connected with the world. On average, they sent 26 texts and 14 instant messages (via platforms such as WhatsApp and Facebook Messenger) and logged on to social media platforms 15 times each day.

Speaking of social media and mobile, smartphones were the most-used device among mothers for logging on to Facebook and Twitter. Such devices even beat out traditional laptops, indicating that busy mothers often access these sites and apps while on the go—or simply while hanging out in a computerless room with their kids. Tablets, the larger mobile device of the two options, were the least popular for accessing these social platforms.