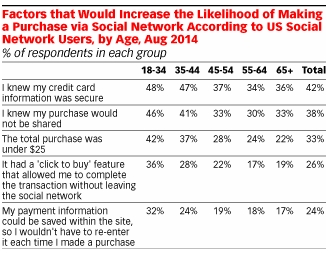 Social commerce isn’t new, and Twitter’s recent announcement of an in-tweet “buy” button is yet another effort to fuel customer purchases via social. But how many digital buyers in the US actually take the final leap on a social platform? Not too many, according to August 2014 polling by Harris Poll for DigitasLBi, which found that just 5{69ae0a25d93a3bfb4c7a14c6cb5bc2b4db8e6111ae4c35307d8a6dded8443ab9} of US adult internet users had made a purchase on a social network such as Facebook, Twitter or Pinterest.

Based on the research, better security measures could motivate social networkers to buy through a social platform. Fully 42{69ae0a25d93a3bfb4c7a14c6cb5bc2b4db8e6111ae4c35307d8a6dded8443ab9} of users said they would be more likely to make a purchase via social if they knew their credit information was secure, while 38{69ae0a25d93a3bfb4c7a14c6cb5bc2b4db8e6111ae4c35307d8a6dded8443ab9} said knowing their purchase wouldn’t be shared would increase their likelihood of completing such a transaction.

One-third of respondents would be more apt to make a purchase if the total was under $25, and further responses indicated that cost definitely had an influence in whether or not users clicked the social buy button. The majority said that price played a big role in their decision to buy something on a social site, and 35{69ae0a25d93a3bfb4c7a14c6cb5bc2b4db8e6111ae4c35307d8a6dded8443ab9} would even use a social hashtag if it meant getting a discount.
And despite many showing a desire for security around social purchases, about one-quarter of respondents said they wouldn’t hold back from buying via social even if that meant a brand would know their purchase history.