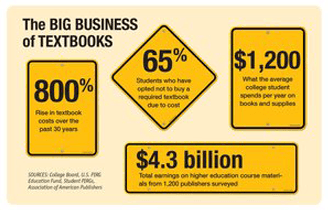 Textbook publishing has long been seen as an impenetrable business, with five major players controlling most of the nearly $14 billion industry. But in recent years, the shift to digital and open-access content has led to a proliferation of free and low-cost alternatives.

Meanwhile, spiraling costs, massive student debt, changing consumer demands and public as well as legislative efforts have pushed the industry toward a true disruption that is now widely considered to be inevitable.

“The educational materials and publishing industry in five to 10 years will be completely remade, just as the music industry, the newspaper industry and the computer software industry were completely remade by the internet,” says Richard Baraniuk, founder and director of OpenStax College.

The nonprofit, launched in 2012 and based at Rice University in Texas, currently offers seven peer-reviewed textbooks completely free online, with the help of funding from large donors such as the Bill and Melinda Gates and William and Flora Hewlett foundations.

Print versions of the textbooks have sold for about $30 to $54, but that cost will drop by 2 percent following a new distribution partnership that brings OpenStax College print titles to more than 3,000 college stores. Baraniuk says the first seven books have already been downloaded more than 500,000 times and have saved students more than $9 million.

OpenStax plans to publish 11 textbooks by the end of 2014. The eventual goal is to create textbooks for 25 of the most-attended college courses in the U.S.

Free and low-cost distribution channels like OpenStax College, coupled with the skyrocketing cost of education and traditional textbooks, are creating “the perfect storm to disrupt the industry,” Baraniuk says. “They’re basically pricing themselves out of the market. The entities that survive are going to have to change radically.”

Shifting business models
Many of the large, traditional publishers have already begun their reinvention by positioning themselves as “learning companies,” rather than publishers.

At Pearson, for example, digital products, technology and services such as course and curriculum design and online tutoring now account for more than 50 percent of the company’s total sales revenue, which reached a total of about $8.8 billion in 2013. Jerome Grant, who leads Pearson’s digital product management for higher education, says the threat from open-source startups is often exaggerated.

“There have always been low-cost alternatives to quality textbooks,” Grant says. “What’s really coming into play is, how effective are the materials we’re putting in front of students?” Effectiveness is measured in terms of student learning outcomes and retention.

Along those lines, a major push is being made into adaptive learning. Josef Blumenfeld, senior vice president of corporate affairs at Cengage Learning, says his company is “well past” the stage of converting print into an e-book format. Its focus has been on creating a “personal learning experience” for students through programs such as MindTap, an online platform that combines text with multimedia content, games, quizzes and tests.

“In the past, we focused primarily on the professor,” Blumenfeld says. But now, the priority is building products that students want—and feel they need—to buy to do well in a class and prepare for the job market, he says.

The drive toward adaptive learning products will increase the use of big data, Blumenfeld says. On the heels of Cengage’s emergence from bankruptcy in April, the company partnered with big data software company Celebrus and hired a new team to incorporate predictive analytics into its digital products.

‘A crisis of access’
With textbook costs rising more than 800 percent in the last three decades, the average college student now spends about $1,200 per year on books and supplies (equipment, software, hardware, lab fees, course fees, etc.) according to the College Board. This reality has led to what Baraniuk of OpenStax calls a “crisis of access” that impacts enrollment and retention.

According to a report from the U.S. PIRG Education Fund and Student PIRGs, 65 percent of students said they didn’t buy a required textbook because it was too expensive, even as 94 percent of this group expressed concern that it would hurt their grade. Nearly half of all students surveyed said textbook costs affected how many or which classes they would take in a given semester.

At many institutions, efforts to boost access to affordable texts have been largely student-led. This spring, the University System of Maryland launched a pilot program sparked entirely by student demand.

MJ Bishop, director of USM’s Center for Academic Innovation, says the system’s Student Council asked if her center could assist in their efforts. As a result, USM partnered with Portland, Ore.-based nonprofit Lumen Learning to offer free, open-source course materials in place of expensive textbooks, saving about 1,100 students approximately $130,000. Eleven professors across six institutions took part in the pilot and received $500 stipends for their participation.

Students at other institutions have taken an entrepreneurial approach. The e-textbook rental platform Packback, for example, began in a dorm room in 2013, when co-founders Mike Shannon and Kasey Gandham were students at Illinois State University.

Now, the company offers roughly 5,000 titles from among what Shannon calls “the majority of publishers” in the market. Available as 24-hour textbook rentals, the books are priced at $5 each or less.

Partnership benefits
While platforms such as Packback could be seen as a threat to traditional publishing, co-founder Shannon insists that the opposite is true.

“We’re an on-ramp to get students away from used books and toward the digital format,” he says. Packback’s model also allows publishers to reclaim millions in revenue lost to the used book market.

Many of the large traditional publishers defy their reputation as being “slow, conservative and impossible to work with” and are open to real change, Shanno says.

He and co-founder Gandham cold-called the cellphone of McGraw-Hill Higher Education President Brian Kibby to make their pitch. After the call, Kibby rented a car, drove two hours to Illinois State and spent two days learning about Packback’s service before partnering with the company upon its launch.

Grant, of Pearson, says more of these types of partnerships are likely to emerge over time. “We distribute through every third party out there,” he says.

“You’re pretty much one Google search away from any content you need,” he says. “Our view is that the internet as a whole wins out.”

In fact, Diaz was so confident in the industry’s disruption that he kept building the Boundless team even as the company was sued early on by industry giants Pearson, Cengage and Bedford, Freeman & Worth for unfair competition and copyright infringement. The suit has since been settled, and Diaz says “it really hasn’t changed our operation at all.”

A key area of focus for Boundless is working directly with institutions. “There’s an opportunity to see content as a service and not as textbooks,” Diaz says.

Packback, too, is aiming to create partnerships with individual schools wanting to promote that they’re offering “the most affordable options, the largest range of options and the most accessibility,” says Shannon.

Providing institution-wide services and technology is a priority for large companies like Pearson, as well. Pearson is working to “broaden its connection points” and “deepen its relationships” with colleges and universities, Grant says.

Cengage recently invested in the startup Pathbrite to incorporate its e-portfolio technology into the MindTap platform. As a result, Cengage became Pathbrite’s preferred partner for institution-wide portfolio deployments.

But as these partnerships develop, Diaz, of Boundless, cautions administrators to be aware of their wide range of choices. “What would be a step backward,” Diaz says, “would be to replace textbooks without the benefits of affordability.”

A timeline for disruption
Some see industry disruption occurring as soon as five years or less. But Karen Billings, vice president of education for the Software & Information Industry Association, expects the transition to digital content to continue moving somewhat slowly in higher ed. She expects the most disruptive force to be the proliferation of handheld and tablet usage on campus.

Though the business is changing, publishers aren’t necessarily losing dollars. The 1,200 publishers surveyed for the Association of American Publishers’ StatShot report earned $4.3 billion from higher education course materials in 2013, up 1.4 percent from 2012.

“I think what you’ll see in the long-term is an environment where free and open has a large footprint, but there’s a space for proprietary and for-profit entities that are going to carefully justify why faculty should recommend and students should buy their content,” says Baraniuk. “In the long run, the hope is that prices will come down and quality will go up.”