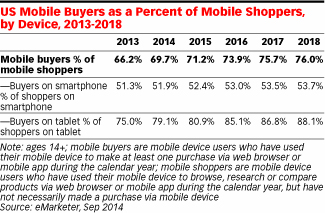 Consumers don’t think about online or offline—they’re shopping. Most retailers, on the other hand, are still having trouble providing a unified shopping experience. Omnichannel marketing as a term may be trendy, but there’s nothing ephemeral about the idea that customers prefer a seamless, cross-channel shopping experience, according to a new eMarketer report, “Omnichannel Trends 2015: Mobile Is the New Retail Hub.”

While the vast majority of retail purchases still take place in stores, the purchase decision process increasingly flows through smartphones. There are a few exceptions: Most groceries and packaged goods aren’t reconsidered each time. But for considered purchases, people are researching online before and during their time in a store.

Mobile is the catalyst for sales captured elsewhere. eMarketer estimates that there were 145.9 million mobile shoppers in the US this year, up 23 million from 2013. Only about half of smartphone shoppers, however, will buy anything on their phones. In 2015, we expect mobile to account for only 1.6{69ae0a25d93a3bfb4c7a14c6cb5bc2b4db8e6111ae4c35307d8a6dded8443ab9} of total US retail sales.