THE BEACONS FAQ: It’s Time To Set The Story Straight About Beacons And Apple’s IBeacon System 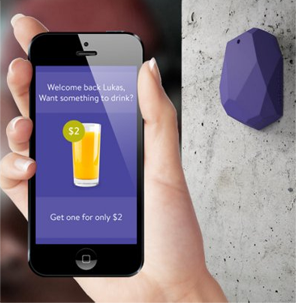 Beacons are a new type of device that could change the way people shop in stores and revolutionise how retailers collect consumer data and interact with shoppers.Retailers can use beacons to trigger location-based features on customers’ smartphone apps, including targetedcoupons, store maps, and hands-free payments.

There has been a lot of confusion about how beacons actually work, so as part of new research on beacons from BI Intelligence, we’ve put together an in-depth “Beacons Explainer,“ with frequently asked questions on beacons. The explainer is paired with our exclusive market forecast, which shows the trajectory for beacon adoption. Beacons are becoming the most rapidly adopted in-store technology since mobile card readers.

Our Beacons FAQ includes answers to some of the following questions:

1. What is a beacon?
A beacon is a small wireless device that constantly broadcasts radio signals to nearby smartphones and tablets. Think of it as a lighthouse emitting light in regular intervals. Mobile apps can listen for that signal and, when they receive it, trigger a location-based action.

2. Why is Bluetooth low energy (BLE) important?
BLE is the signal emitted by beacons, and it’s important for two reasons. First, it transmits radio waves, which can penetrate physical barriers like walls, unlike Wi-Fi or cell signals, which are often disrupted. Second, BLE consumes only a fraction of the battery power that classic Bluetooth does.

3. Do beacons work with iPhones and Android phones?
Yes, but they work differently. Only iOS 7 devices constantly scan for BLE and wake up relevant apps — even if they are closed — when they come within range of a beacon. iPhones and iPads can do this thanks to Apple’s iBeacon protocol (more on that below). Android devices, on the other hand, do not have a beacon system of this type at the operating-system level. Android apps must therefore scan for BLE, meaning that for Android users to interact with beacons, they have to have the app running on their phone, at least in the background. Beacon scanning at the app level means there is more of a battery drain for Android users.

4. What is an iBeacon? Is it just an Apple beacon?
Sort of. iBeacon is not an off-the-shelf beacon that retailers can buy and install in their stores (at least not yet). Apple has filed documents with the Federal Communications Commission, which suggest that the company wants to manufacture iBeacon hardware. Currently, iBeacon is a system built into the latest version of Apple’s iOS 7 mobile operating system that lets iPhones and iPads constantly scan for nearby Bluetooth devices. When iBeacon identifies a beacon, it can wake up relevant apps on someone’s phone, even when an app is closed and not running in the background. Additionally, iPads and iPhones can act as beacons; they can emit beacon signals to wake up apps on other iOS devices.

5. What does Apple’s iBeacon technology do?
iBeacon lets iPhones and iPads constantly scan for nearby Bluetooth devices. When it identifies a Bluetooth device, like a beacon, it can wake up an app on someone’s phone — even if the app is not running. Developers can make their apps responsive to iBeacon by using Apple’s Core Location APIs (application programming interfaces) in iOS.

7. If, as a retailer, I purchase beacons from a vendor, how do I know they will work with my app?
Developers have to include the unique identifier of a beacon in the code so their app will be able to recognise it. If an app doesn’t know the identifier for a beacon, then it can’t be on the lookout for its BLE signal. Most beacon vendors provide developer support to help users configure their apps.