HTC And Valve Have Cracked The VR Code 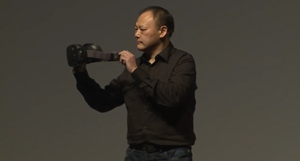 “I’ve been doing this for fifteen years,” I told HTC’s mild-mannered demo wrangler at MWC today. “And this is the first time I’ve been actually excited about a technology in five.”

He had just walked me through one of the best demos I had ever seen. It was the HTC Vive, a sensor-studded helmet with dual hand controllers that allowed me to enter almost a dozen alternate universes as real and as exciting as the real world. When I say I was impressed, amused, and excited, trust me. This was one of the best things I’ve seen in a long time and I am thrilled that I got to be part of it.

The Vive, which is in its development stage, is essentially an immersive VR goggle set that ascertains your position using pulsing laser lights. Sensors on the mask triangulate your height and X/Y/Z coordinates based on the position of the lasers and the hand controllers look like a more stylized Wiimote but turn into futuristic ray gun like appendages (or even cartoon hands) in the game. The entire rig ran off of a stock but powerful gaming PC that pumped out the various demos including an undersea adventure complete with whale, a cooking test that looked like a Nintendo game, and a sneak preview of a new Portal game that was so immersive that you get chills when a massive GlaDOS unfurls like a malevolent umbrella.

The content made the demo and Valve’s games were, in a word, amazing. They were funny, fun, and perfectly calibrated to excite the senses and incite wonder. It was interactive umami – the hardware, the software, the graphics, and the writing were all mixed together to create something that I have never seen.

I have used multiple VR systems, most recently the Oculus, but this was something different entirely. It was smooth, sharp, and the content was perfectly suited for the medium. Everything interacted without a stutter or stitch. A painting demo allowed you to create 3D objects in real space and made me realize that this was the perfect environment for 3D modeling. The tiny tabletop game demo – essentially a sort of tower defense game in miniature – made me forget I was in a featureless room in Barcelona. The closest thing I can compare it to was the vision in William Gibson’s Dogfight where jacked in players controlled tiny 3D fighter planes. It was the first time in years that I smiled at a demo.

I have waited a long time for William Gibson’s vision of cyberspace to become real. It became real today for me in that room. I do not want to oversell this but of all the systems I’ve seen – and there are still plenty out there – this was the closest to magic. And we all know what Arthur C. Clarke has to say about magic…

My only complaint? The frame rate on some of the characters wasn’t quite great resulting in blurry characters. But I didn’t care. It was beautiful.

HTC isn’t quite done. The setup is clunky and only the dev kit is shipping this spring. But I think HTC and Valve have created something amazing here and I think these two companies are doing exactly the right thing at exactly the right time. We’ve paid lip service to VR for two decades but it’s finally been cracked. As these tools get better expect realtors to start selling VR rooms in their new homes and expect conference tables to hit the skids as we all wander around interacting in virtual space. Do not misunderstand me: this is cutting edge technology in the way, say the way Macintosh changed computing and the Motorola StarTAC changed telephony. It is both vitally important and yet amazingly nascent and I am looking forward to see where things are headed next. Until then, I can’t wait to play with this at home.