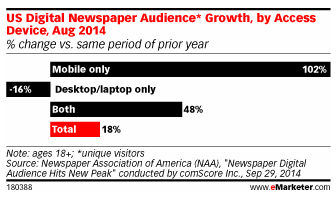 One reason for the growth? Mobile devices. The percentage of mobile-only digital newspaper readers more than doubled between August 2013 and August 2014, while the portion of unique visitors who only looked at news on desktops and laptops dropped 16{69ae0a25d93a3bfb4c7a14c6cb5bc2b4db8e6111ae4c35307d8a6dded8443ab9}. But not all mobile users had ditched their PCs—the number of readers who looked at digital news via mobile and nonmobile devices rose 48{69ae0a25d93a3bfb4c7a14c6cb5bc2b4db8e6111ae4c35307d8a6dded8443ab9}.

How to Leverage Tablets for Marketing in BranchesForget LinkedIn, Conspire Analyses Email To Be Your Next Networking Tool