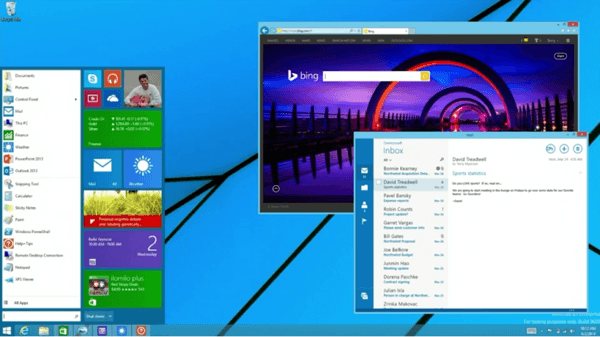 We’re starting to understand what’s next for Windows. Considering the most recent leaks involving the Charms Bar, desktop improvements, and the like, it’s becoming plain that some of what Windows 8 emphasized and introduced will be scaled back in Microsoft’s next Windows build.

Windows 9, often referred to as Threshold, isn’t too far away. There is talk of a beta late this year, and of a release in the first half of 2015, though those estimates I would hold as at least mildly optimistic.

If Windows 8 was a dramatic lurch towards mobile computing, especially on tablets, Windows 9 appears to be heading for a more equitable balance between desktop muscle, and mobile capability. That fits into the larger picture of the computing environment, where PCs are stabilizing after a dramatically difficult period, and tablet growth is cooling.

Microsoft needs to ensure that its desktop-facing operating system manages to support the still-large demand for desktop-focused PCs well. That doesn’t meant that Windows, as part of Microsoft’s vaunted ‘one Windows‘ strategy can abandon tablets, but it does mean that the focus needs to be more even.

Windows 8.1, of course, has been a part of the company’s work to make Windows 8 a better desktop operating system. But a partially-numbered Windows update can only be so radical — Windows 9 has more latitude to enact change.

The idea of removing the Charms Bar, bringing back the Start Menu, and adding multiple desktops are already picking up positive community reaction.

So back to the desktop? Not entirely. Microsoft isn’t backing down from the Windows Store. It isn’t abandoning the Start Screen. Live Tiles do not appear to be going anywhere, on Windows or Windows Phone. Instead the company seems to be at once focusing on providing a Windows 7-quality desktop experience in Windows, while also tying that desktop life to its new mobile-friendly interface, and apps.

That’s why it’s widely expected that Metro apps will be able to run in a windowed-fashion on the desktop in Windows 9, better bringing the Windows Store into the most popular side of Windows. (The company’s move in Windows 8.1 to add a Store shortcut is a preamble for this more important change.) [Update: Your author is a moron. Microsoft did in fact promise this in the future. I had my wires crossed.]

Windows 7 managed to get past Vista’s reputation. Perhaps Windows 9 can repeat the feat.