Developments and Trends in the Smart Home 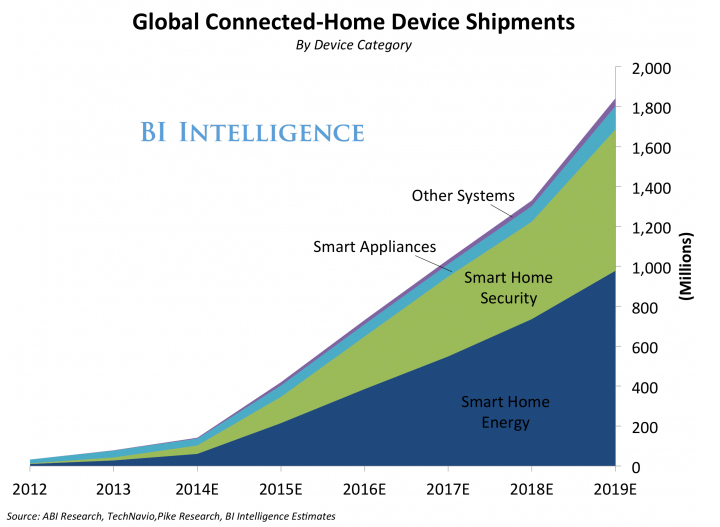 On Tuesday, Apple released new details about its 2015 developers conference, including a logo for the conference that resembles the shape of an Apple TV. The slogan for the conference – “the epicenter of change” – hints that Apple might announce that it is turning the Apple TV into a smart home hub, or “epicenter.”

For background, smart home hubs act as the “epicenter” of the smart home by connecting to all of the consumer’s smart home products (e.g., internet connected lightbulbs, thermostats, etc.), enabling them to control them from a central point.

Turning the Apple TV into a smart home hub would put Apple in direct competition with Amazon for the heart of the connected home. Last week, Amazon announced new capabilities for its Echo connected speaker, enabling it to control a variety of WeMo and Phillips Hue smart home products. BI Intelligence previously reviewed the Echo, and said that its greatest potential would be as a centralized personal assistant for controlling smart lights, televisions, and appliances. The Echo’s new capabilities move it in that direction, but it could soon face stiff competition from Apple.

BI Intelligence believes that Apple TV and Amazon Echo would likely get more traction with consumers than other smart home hubs on the market because of their core capabilities — i.e. the Echo as a connected speaker and the Apple TV as a streaming device. This means that consumers will likely buy the Echo and Apple TV for those capabilities and will then buy smart home devices to be controlled by them.

Conversely, the majority of smart home hubs only enable the user to connect to their smart home products, but don’t have a core capability. This means that consumers would buy the hub after they have purchased multiple smart home devices.