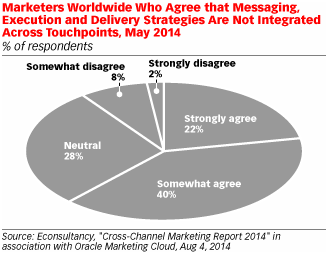 As consumers bounce from device to device throughout the day, marketers are trying to figure out how to track them across platforms. As a result, cross-channel marketing was a top priority for the majority of client-side marketers worldwide queried in a May 2014 study by Econsultancy in association with Oracle Marketing Cloud. More than two-thirds of respondents agreed that integrating all marketing activities across channels was a main goal.